There are lots of things that you can do with your iPhone, sure, but we’re willing to be that there are a few more that you either don’t know about or haven’t used before, particularly with all of the additions in iOS 5. Did you know you can put in typing shortcuts similar to Text Expander? Or that you can make custom vibrations for each person? If you didn’t  — hit the jump and find 19 top secret, ultra-cool tips for the iPhone.

Want to get the most out of the iPhone’s camera and photos? Follow along as we guide you show you some well known (and not so well known) features of iOS 5 and the iPhone.

1. Use Your + Volume Button as a Shutter on Your iPhone…

The same trick above works for the volume button on your headphones, too. This comes in particularly handy if you have a Glif or similar tripod mount for your iPhone. If you couldn’t already guess, this works for Bluetooth headphones as well. 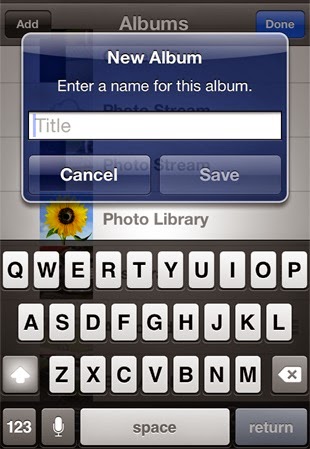 If you find that your photo album selection lacks a little pizzaz, feel free to add more using this simple trick. Go to the Photos app, click Edit in the top right corner and then click the Add button that shows up in the upper left side of the screen. Now just title the album whatever you want and you’re golden.

Want to look at the most recent image you shot? Open up the camera app and slide the screen from left to right. It’ll show the last picture taken, and you’ll be good to go.

5. Take a Picture With a Double Tap

Stuck on the lock screen but want to take a picture? Double click the home button and look just to the right of your Unlock slider where you’ll find a little camera icon. Touch it, and away you go to taking pictures. 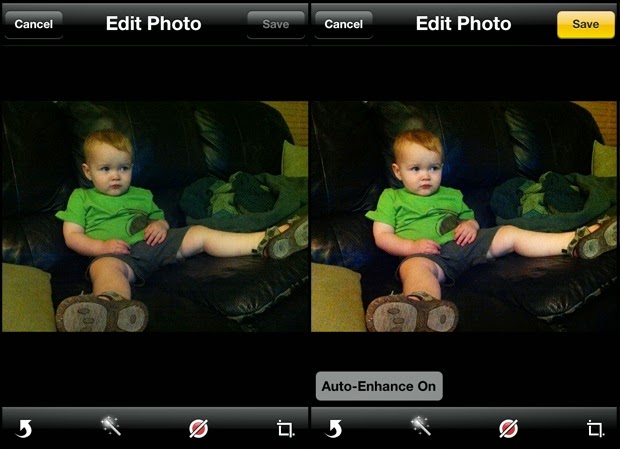 Man, those red eyes in that shot look horrible, right? If only you had some kind of way to tweak your shots so that they looked perfect. Turns out you do, all baked into iOS. Just hit Edit on any image, and you’ll be presented with your tools along the bottom row. They’re not super extensive, but it’ll get the job done in a pinch.

Everyone has to type things out on their iPhone, whether it’s text messages or just responding back to an email. Why not make your life a little bit easier? Here are a few tips that will help you out when you’re working behind the keyboard. 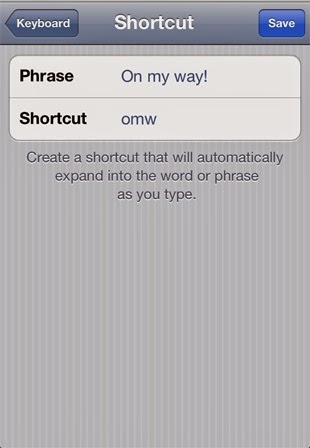 Do you find yourself typing the same thing a million times a day? Go to Settings > General > Keyboard and look for Shortcuts after you scroll down just a bit. Then just enter the phrase and appropriate shortcut, and the next time you type that shortcut the phrase will appear. This is particularly handy for things like BRB or your email address.

Want to make sure the accent mark in Montréal is correct? Just hold down the letter you need to accent, and all of the extra characters will appear. Just pick what you need and go from there.

If you’re really mad and want someone to get the point, or you just like typing in all caps, turn on caps lock by double tapping the shift key. Now you can type with fury!

11. Look Up a Word in the Dictionary

Stumped on what that word in your favorite novel in iBooks means? Wondering why your friend used such a complex word in a text? Look it up using the iOS dictionary. Just hold down on the word that’s got you befuddled, and then touch Define. Now you know the answer and can respond appropriately. 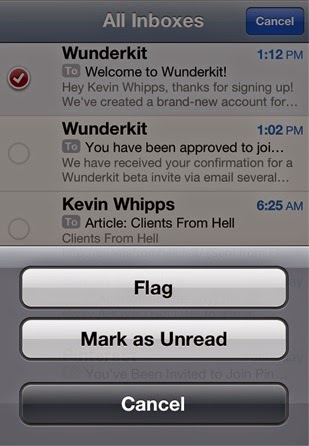 If you’re one of those people who flags every email that comes through, make your OCD happy with iOS 5′s new flag an email feature. To do so, go to your Inbox, hit Edit then select the email(s) you want to flag. Select the Mark tag in the bottom right corner and then select Flag, and you’re good to go. 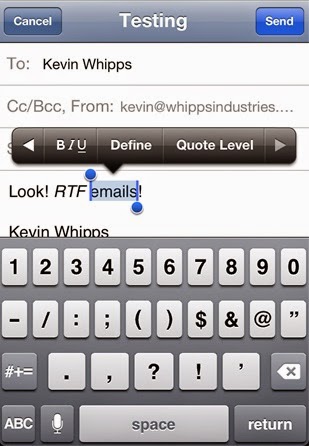 For those that prefer their email fancy, RTF is now available. Just highlight the word or words you want to accentuate per your usual steps, then select the arrow and then the BIU button to pick between bold, italics or underline. 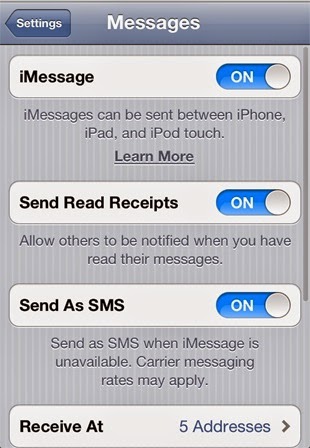 IOS 5 brought us iMessage, and with it the ability to get receipts when other people read your messages. It’s an opt-in deal though, so to turn it on, go to Settings > Messages and turn on Send Read Receipts.

Siri changed the way we communicate with our iPhones, and is one of the big features for the iPhone 4S. If you’ve got one, here are a few tweaks that should help you out along the way. 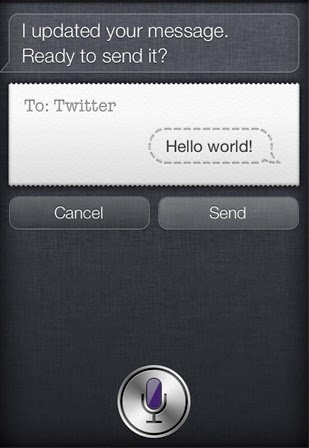 Wouldn’t it be great if Siri allowed you to dictate your tweets? Turns out you can, but it’s a bit of a workaround. First, read up on sending your tweets via SMS, which is available on Twitter’s site. Once that’s all squared away, just add Twitter as a contact in your Contacts, and then treat the service just like it was any other person that you want to send a message. (By the way, if Siri cramps up on you because you used the word Twitter, change it to something different that you’ll remember and it’ll be fine.) You can do this with Facebook too, The Next Web has a great writeup.

16. Get Siri by Holding Your iPhone Up To Your Ear 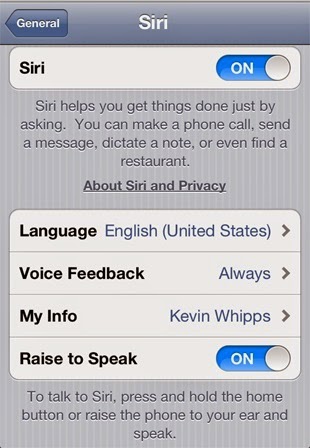 Not everyone knows about this one, but there’s another way to call up Siri that doesn’t require holding down the home button. Go to Settings > General > Siri, and then select Raise to Speak. Now the light sensor on the iPhone will detect when you’ve got the phone up to your ear, and Siri will pick up. It’s a handy way to use Siri in public without looking like a jerk.

One of the best things about the iPhone when it first came out was that it provided a really good web experience, where viewers could see full pages, not just mobile-optimized garbage. If you want to get the most out of your web browsing experience, here’s a few tips to make things go a little smoother. 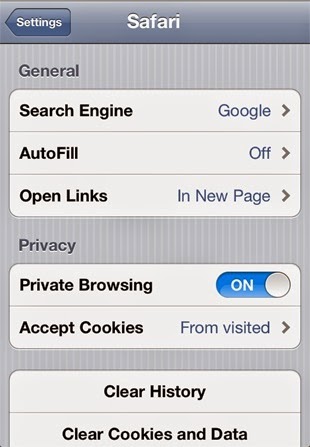 Want to make sure that your information isn’t getting sent out to the Internet via Safari? There’s a quick way to fix that: Go to Settings > Safari and then click the tab for Private Browsing. Now all of your activity on the web is top secret, so proceed at your own discretion.

Doesn’t it suck to scroll through a long webpage and then flip back up to show the Address bar again? Just tap the top of the screen by the clock and Safari will zip back up and reveal the address bar, no problem. 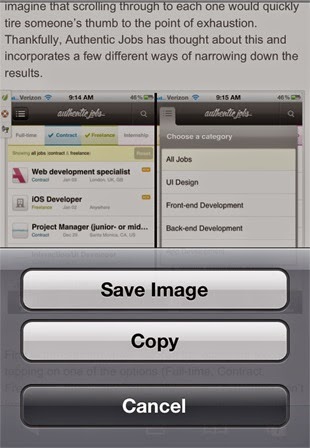 If you found an image on a website that you want to save for yourself like a wallpaper or icon, just hold down your finger on the picture for a second or two. A menu will slide in from the bottom of the screen giving you the option to Save Image or Copy it to the clipboard. Once it’s saved it’s in your Photo Library, ready for whatever you want.
Posted by Jatin Israni at 2:30 PM

Email ThisBlogThis!Share to TwitterShare to FacebookShare to Pinterest
Labels: TT

If you are a Twitterholic

Proud to be an IndiBlogger

I am on BlogAdda too